Burton Blatt Institute Chairman and University Professor at Syracuse University, Peter Blanck’s new book titled Disability Law and Policy book was released in honor of the 30th Anniversary of the Americans with Disabilities Act (“ADA”). Disability Law and Policy provides an overview of the themes and insights in disability law. It is a compelling compendium of stories about how our legal system has responded to the needs of impacted individuals. 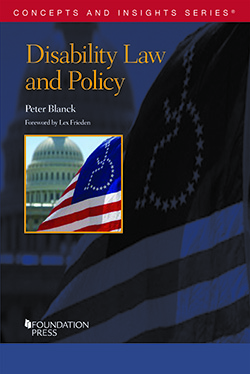 The year 2020 marks the 30th anniversary of the ADA, celebrated on July 26. During the past three decades, disability law and policy have evolved dramatically in the United States and internationally. Blanck, also professor at Syracuse University’s College of Law, says “Walls of inaccessibility, exclusion, segregation, and discrimination have been torn down, often brick by brick. But the work continues, many times led by advocates who have never known a world without the ADA and are now building on the efforts of those who came before them.”

Lex Frieden, an internationally distinguished disability rights scholar and advocate and former Chairperson of the U.S. National Council on Disability, writes in the Foreword to Blanck’s book: “In 1967, I survived a head-on car crash. When I woke up, I was paralyzed from the shoulders down. . . . My story is one of many in the modern disability rights movement. In Disability Law and Policy, Peter Blanck retells my story, and the personal experiences of many others living with disabilities, in a master tour of the area. Peter is a world-renowned teacher, researcher, lawyer, and advocate. He has been central to the modern sea change in disability civil rights . . . Disability Law and Policy should be read by all of us—people with the lived experience of disability and their advocates, parents, family members, and friends.”

Blanck says that “a new generation of people with disabilities, building on the efforts of Lex Frieden and many others, families, friends, advocates, and supporters, is stepping forward. As a guiding beacon, disability law and policy offer hope of a future in which all people, regardless of individual difference, will be welcomed as full and equal members of society.”

Disability Law and Policy is published by Foundation Press and is available for pre-order from the  West Academick [www.westacademic.com/Blancks-Disability-Law-and-Policy-Concepts-and-Insights-Series-9781684672271].

About BBIThe Burton Blatt Institute (“BBI”) at Syracuse University reaches around the globe in its efforts to advance the civic, economic and social participation of people with disabilities. Through program development, research and public policy guidance, BBI advances the full inclusion of people with disabilities. BBI builds on the legacy of Burton Blatt, a pioneering disability rights scholar. BBI has offices in Syracuse; Washington D.C.; Atlanta; New York City; and Lexington, Kentucky. Learn more at bbi.syr.edu.